Click to view our Accessibility Statement
How to Set Up Dual Monitors on Apple M2 or M1 MacBooks? – Kensington

Yet, base M1 CPUs are limited when it comes to dual monitors. Apple users who need multiple monitors to streamline workflows and complete their tasks have struggled to find a solution.

While the M2 chipset takes the capabilities of the M1 chipset even further, there are still display constraints on the base chipset.

If you need multiple monitor support for your Apple's new M2 MacBooks (or have the original M1 MacBook) that only support a single display, Kensington solutions include docking stations and video adapters that enable you to set up multiple displays quickly.

In this article you will find two primary use cases and how to set up your dual monitors when using your MacBook Pro or Air devices with the M1 and M2 base chipsets.

According to Apple's technical specifications for the revised MacBook Air and the new MacBook Pro, the M2 only supports "one external display with up to 6K resolution at 60Hz."

At the WWDC 2022, Apple went on to announce that the M1 (the original, not the Pro/Max/Ultra versions) and the new M2 will continue to only support a single display.

For users that want more than one display on these devices, the news of single-display support was a disappointment. However, that’s where Kensington comes in.

If your desktop already incorporates a docking station, expand your display capabilities by simply connecting USB-A DisplayLink video adapters to the docking station. Once connected, download the latest DisplayLink driver for macOS. Your desktop is now ready to support multiple monitors – it’s that simple.

The latest DisplayLink video adapter software allows you to use your existing docking station to connect up to five displays to your M1 or M2 MacBook.

If you experience any problems after the software update, check back to ensure the latest version of their software was installed from DisplayLink. 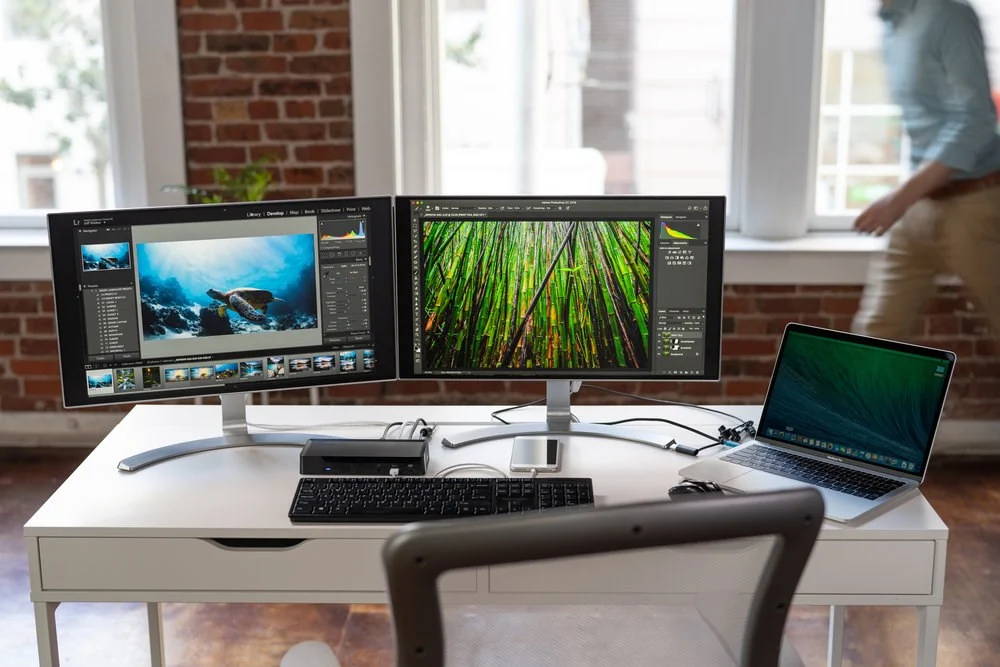 Extend your external display capabilities to multiple monitors with one of the docking solutions listed above. With a DisplayLink-enabled docking station, you will have the ability to support your entire setup without needing complex workarounds or additional adapters.

Apple’s decision to provide support for a single native display was tough to understand at first. However, with the release of Pro, Max, and Ultra chipsets, the reasoning has become more apparent.

That said, for any base chipset M1 device (and the new base M2 devices), users will need to get creative if their desk setups require more than one external monitor. Even with the latest changes in Apple’s underlying chip architecture, you can still use your new MacBook with multiple external monitors.

With any of Kensington’s USB-C, Thunderbolt 3, or Thunderbolt 4 dock, users of the M2 and M1 MacBooks would work well supporting only a single external monitor. Other features of the docks (Thunderbolt/USB ports, ethernet, audio, etc.) will work without issues.

Maximizing Productivity with Your New M1 or M2 MacBook

Those who use MacBooks for work rely on innovation to achieve new efficiencies and speed up workflows. The M1 MacBooks incorporate numerous operations into their high-performance chipsets that go beyond the processors of the past.

In early June, Apple announced another exciting advancement in the MacBook ecosystem - the launch of the M2 chipset! What this means is that this latest design offers unparalleled performance and gives you faster video and image processing times.

What We Know About the Latest Apple M2 Chip

The next generation of Apple technology designed especially for the Mac is the Apple M2 chip.

Apple announced the launch of the M2 chip in a June press release boasting "new levels of power-efficient performances and capabilities." The new chip takes the M1 chip even further for the updated MacBook Pro (13") and the completely redesigned MacBook Air.

The M2 chips have enhanced second-generation 4-nanometer technology and have 25% more transistors than the M1, at 20 billion. You get more memory, faster performance, and Apple's next-gen custom technologies.

Here is what you need to know about the latest Apple M2 chip and how it enhances the user experience for the M2 Pro and M2 Air MacBooks:

Apple redesigned the M2 MacBook Air around the next-gen M2 chipset to enhance speed and power efficiency. At only 2.7 pounds and 0.44 inches thin, this ultra-compact device is an ultrafast, ultracapable laptop that allows you to work, create, and play just about anything, anywhere.

Bottom line, the M2 chipset has made using your MacBook Air (along with MacBook Pro) the most user-friendly, performance-driven experience in the Apple ecosystem. It also means multiple display options when paired with a docking station from Kensington.

For multiple displays on your base chipset M1 or M2 MacBooks, Kensington has you covered with our range of industry-leading DisplayLink docking stations.

For more than one display on your M-series Pro, Max, or Ultra-powered MacBooks, Kensington has multiple Thunderbolt solutions that support up to 40Gbps data, dual 4K video, and 85W or greater power delivery – all through a single cable. They also led the charge, releasing the industry’s first Thunderbolt 4 docking station.

WHAT ARE YOU LOOKING FOR?

Our customer support team is your go-to when you need a recommendation, a refund, or just to say hi. Whatever it takes, we're here for you.

Free shipping on orders over $49.

If you are not satisfied with your purchase, we'll make it right. Call 1-800-243-2972 within 30 days of receipt to obtain a Return Material Authorization (RMA) number and instructions. Read our full policy.

Thanks for subscribing! Here is your 10% Off Code: WELCOME10

Do you want to add products to your personal account?